Don’t let me fool you for one moment. Sure, I was wearing fantastic shoes (translation: NOT high heels) and my bow tie was encrusted with rhinestones. My mohawk was stacked high and I was strutting around in a tuxedo. Did I feel ridiculous? Absolutely not. Was I ready to have some fun? You betcha.

Was I prepared to meet Paul Sampson…? Not exactly.

The day of June 21, 2014 was cooler than the days preceding. The sky was overcast, and there was just enough of a breeze to keep things pleasant. I was never more grateful. Having never worn a tuxedo before, I didn’t realize just exactly how many items of clothing make up such a package, and I now have newfound sympathy for the male half of the human race for this kind of attire. Still, with the weather cooperating, I was in fine form, and comfortable in my shiny persona. 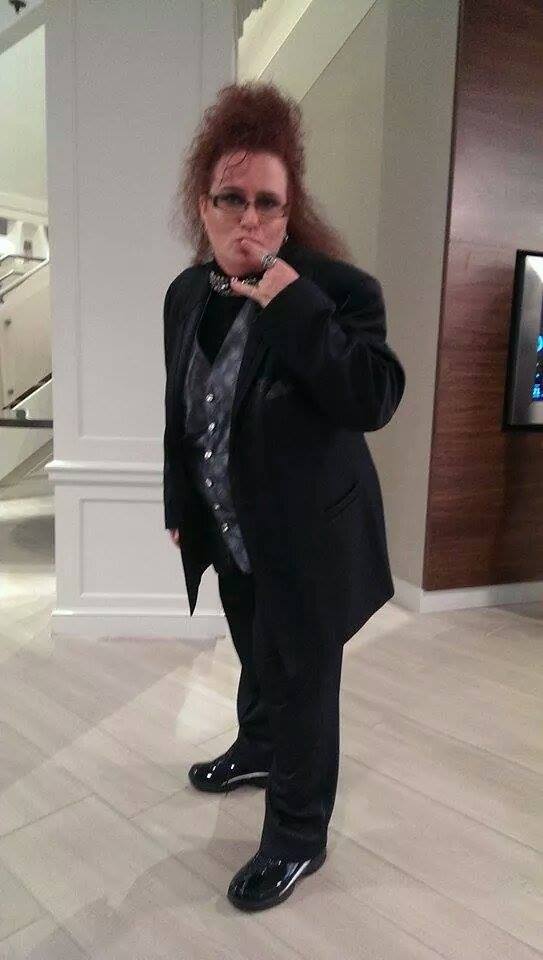 I was a bit restless and excited, and several times I left the lobby and stepped outside to walk around. The last time I stepped out, there was a tall handsome man standing with his beautiful wife, and they were talking. He looked over at me and blinked, as this man was also in a tuxedo, his being much more manly than my rhinestone attire, and without a moment’s hesitation I pointed at him dramatically and said, “Heyyyy…..nice tux.” His response was lightning fast. “Hey…..so is yours!” and we laughed. I later found out that, coincidentally, this man and his wife were both attending the same event.

I swept back into the Hilton, and over to where my new friend Amanda sat, just inside the lobby.

I paced back and forth, wandering around and cracking jokes with Amanda. She was dolled up in the exact opposite manner from me; beautiful dress, delightful hairstyle, and …yes: heels. So she lounged while I paced and kept an eye out for the elevator doors to open.

Carlette, the conductor of the evening’s events, was with one Mr. Paul Sampson, for a meeting. What they spoke about, I’m not sure as I did not ask. What I knew was that the limousine, which had been thoughtfully provided by another Indie creator, author C. William Giles, was outside, and the driver already had both doors open and waiting for our party to be whisked away into the evening.

So I paced, and glanced every few moments at the elevator. At long last, the elevator doors opened and Carlette emerged, smiling. I looked past her, then past the guy in the leather jacket, looking for a guy in a tuxedo. I had planned it all out, with plenty of teasing and encouragement from the rest of our group. I would do my horrendous version of an English accent when greeting Paul Sampson, and be really loud and obnoxious for just a moment…but wait; where the hell was he?

My eyes zoned back in on the guy in dark glasses and leather jacket, carrying a package or two and talking with Carlette. Yeah, that was him. Blue jeans, dark shirt, dark glasses, and he was smiling as he saw my hesitation.  My moment to be ridiculous had passed, and I simply walked up and said hello. Carlette introduced us, and my plan was again thwarted as I went to shake this celebrity’s hand and he instead gave me a warm hug.

Carlette was resplendent in her black evening gown and glittery heels, and we three stopped momentarily to introduce Mr. Sampson to Amanda. As we made our way outside to the limousine, the rest of our party had already slipped inside and were talking and laughing.

The ride in the limousine was full of conversation. The group brought up my original plan to burst forth with my terrible rendition of an English accent at my first encounter with Paul Sampson, and I obliged, momentarily, with a sample of the accent.  Paul laughed, and I watched as he and Carlette held their own personal conversation while all the other conversations swirled around us.

The limousine pulled up, smoothly, in front of the theater, and I was the first one to exit. As I was dressed in the most comfortable of shoes, I automatically assumed the role of assisting several of the ladies out of the limo and onto the red carpet. We were all very excited at this point. People were strolling up and down the sidewalk and stopped to watch us exit the limo. Cameras were flashing and I finally made it inside the theater. More flashes and then we were whisked upstairs for photographs. So much fun already and the screening had not yet begun!

Paul Sampson was very much a good sport with the dozens and dozens of photographs. I noticed he left his sunglasses on for much of the time, and at first I wondered. Then, as the flashes kept on and on, and my head began to hurt a little, I thought if nothing else, I bet he wasn’t getting the flash-photography headache I had!

Down into the theater the crowd surged, in as good taste as a crowd can surge, and we all took our seats. To my surprise, I turned and looked to the seats behind me, and there sat the mysterious tuxedo man with his beautiful wife! I joked with him for a few minutes before the lights went down, and because I was sitting directly in front of him, sporting a mohawk, I tried to sit in such a way that my hair would not obstruct his view. Let it never be said that AnnThraxx has no manners!

Carlette walked out on the stage and introduced the film, and as she left the stage the screen began to descend. I was very excited…very comfortable, and very excited.

The movie….ah, what I can I say? I enjoyed it more on the big screen than any of the other times I had seen it!  There are Indie movies out there that people throw together for the sheer desire of throwing a movie together. This was most definitely not a thrown together film.  I watched and barely breathed, especially at the nail gun scene. I still shudder when I think of it.

Paul Sampson crafted this film with the finesse of someone who has been in the business for many years. I knew from reading and hearing interviews that he was involved in all aspects of production. I had seen many Indie films prior to Night of the Templar, and my initial impression was at how tastefully edited Sampson’s film was – the fight scenes were believable, and there was enough blood. There are plenty of films out there with unbelievable amounts of blood in a kill scene; take it from someone who has had enough morbid curiosity to explore the world of morgue and crime scene photography: I know how much blood is in the human body. I know about spatter and projection. I’m no expert, but as a layman to that side of filming, I found the kill scenes exquisitely chilling because of the right amount of blood.

The humor woven throughout the film only served to give the audience a moment of reprieve, and I enjoyed every moment, glad that this wasn’t a film filled with nothing but gore and heavy-handed fear. I haven’t seen quite this balance of suspense and mystery coupled with murder and intrigue in a long, long time.

When the credits rolled, the applause followed. I stood and slipped away to find the microphone, as my duty was to make sure everyone was heard and addressed immediately afterward for the question and answer session.

Microphone in hand, I stood off to the side of the audience as Carlette took the stage and introduced Paul Sampson. He came out onto the stage and offered a dazzling smile to everyone, and thus began the questions.

I already admired the guy from our initial meeting; some celebrities are stand-offish and shy away from human contact. Some insist on certain things being done a certain way when they are out in the middle of their fans. Paul Sampson was not this kind of celebrity. His demeanor was relaxed and calm, and genuinely friendly. When he took the stage, the questions began, and every answer was a story. I listened, standing off to the side of the audience, arms crossed and hands clasped, looking very much like a freaky sort of usher I’m sure…but I listened, enraptured as his natural storytelling abilities took over and he told us insider details as though we, the audience, had suddenly become privy to his inner circle. We were now his close personal friends, and the in-depth answers reflected this.

Much like the film he created, Paul Sampson handled every question with care and pure intent. The audience was as enthralled as I was. This was part of the Paul Sampson Experience.

After the Q & A, those of us in the after-party headed upstairs to music and to speak personally with Paul Sampson.  Heineken, one of the sponsors of the event, flowed abundantly for the guests and, after shedding my tuxedo jacket, I floated from one group to another, shaking hands and talking and laughing. The photographers materialized and I couldn’t resist a few antics, photobombing Paul Sampson and finally, taking one of my favorite photos of the evening, clutching him in a maniacal grasp and leaning in for a fan-crazed lick. He took all of this in stride and signed autographs, and we as guests enjoyed ourselves immensely. 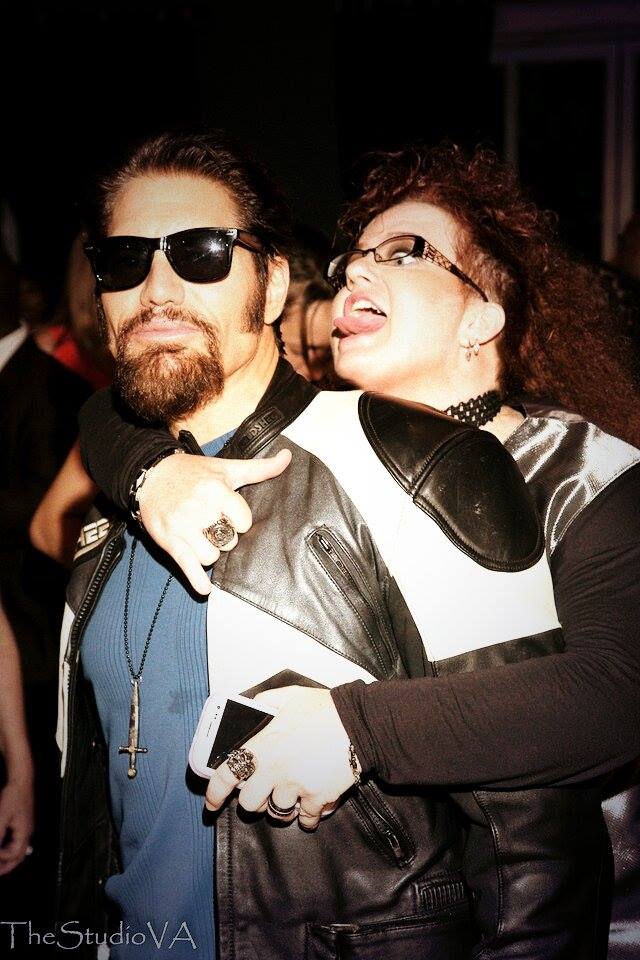 The evening eventually wound down and each of us slipped away. I did eventually get to shake Paul’s hand, and received a warm kiss on the cheek as well, to my surprise! I was ridiculously pleased with the entire night. Carlette and Paul disappeared into the evening, as well as the others in my newfound circle of friends. I was told, just before we all scattered, to be sure to attend brunch at The Chart House the next day.

Eventually I made it back to my hotel room and collapsed into bed. It was the wee hours of the morning and I had barely shut my eyes before it was time, again, to get up and go!! So I did, untangling the riot of mohawk hair and donning a loud black and white tourist shirt.

The hotel shuttle whisked me away to the brunch, and for once in my life I was the first to arrive. I relaxed on the pier for a while, watching sailboats float lazily on the water. The sky was almost the same blue as Paul Sampson’s eyes, and clouds hung in summertime splendor. The pier was filled with people, clustered together in groups and pairs, clad in shorts and short dresses. After a time, I wandered into the restaurant and inquired about Sampson party, and a few people from the night before began to filter in.

At last Carlette and Paul arrived, and we sat around the table, talking and laughing. It felt very much like a group of old friends gathering for a meal, as opposed to a movie star meeting with his core fan base.

I can’t think of many other times in my life where I enjoyed this kind of company. The food was excellent, and the conversation stimulating. We all swapped stories and compared notes on the night before, debating old movies and discussing everything from historical sites just outside the window to the inner workings of The Wizard of Oz. It was, as I said, just like old friends.

More hugs and kisses and then we all paired up on the way back to the parking garage. I walked with Paul and we talked about event planning and the never ending work involved.