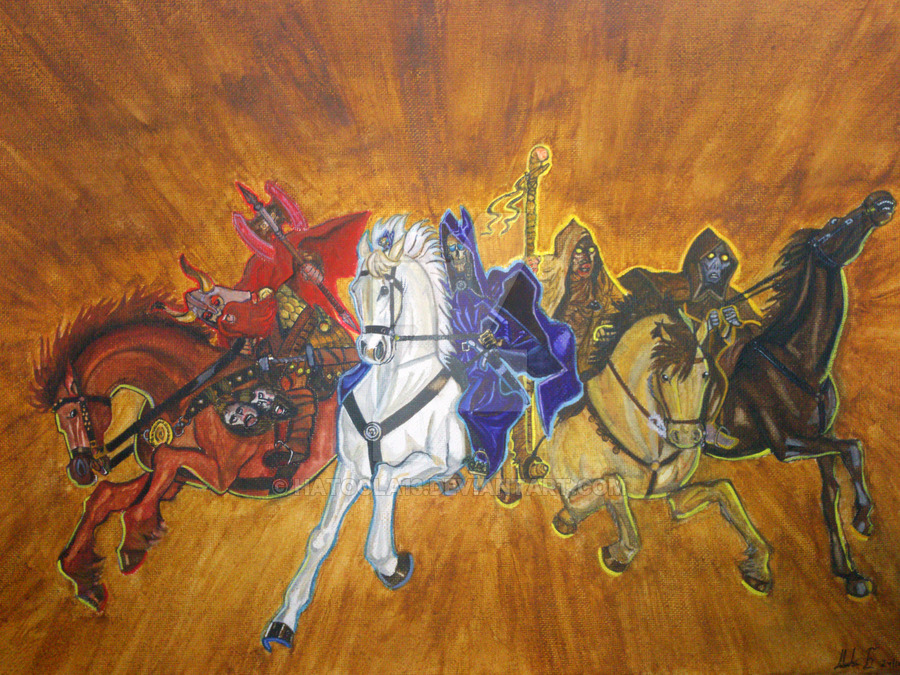 Just over five years ago, I was a part of a group of writers. Four of us started this thing for a while, where we were the Four Horsemen of the Apocalypse. Don’t read too much into that. We weren’t the world’s best writers…but we certainly weren’t the worst.

.
Anyway, my friend Craig was one of the Four. He was War, and he rather liked that idea. I was Pestilence, which I didn’t mind at all.

.
Craig and I spoke regularly, despite him living in England and me in the United States. We talked about writing, story ideas, film; everything that had anything to do with those sparks that exist inside the head of a storyteller.

I was very fond of Craig, and he recently passed away, gone entirely too soon…

The following was written during our Four Horseman days, and I’m not sure it was ever published anywhere. I wrote it out of the pure fondness and respect I had for Craig, and when I wrote War into life, I modeled him after my friend as closely as possible.

.
This story, though it might be a 2014 throwback to the Horseman days, is dedicated to my dear friend Craig, also known to his readers as C. William Giles.

In the early days of The Four Horsemen, the world was a newer place. There were no Machines to speak of, and the lines of communication were only as far as the fastest steed could gallop. There were more shades of green then most human eyes could translate, and the raping of the world by Man’s ingenuity had not yet transpired.

There existed a certain expansive home where the Four would meet, and plan, and reside for days and weeks at a time, depending on what catastrophe was to be unleashed into the air, and many times they were all there, together.

And in the west of the manor, the largest turret was half-covered in lush ivy. It snaked its way up and curled around the larger window, dangling and moving with the slightest breeze. The setting sun smiled into this window, and into the lavish room. The light splashed onto the opposite wall — the only wall that held no books, for that very reason. This portion of the manor was occupied by War, and on that day he was home.

War held books in higher esteem than most of their own authors. Having penned many of his own, his collection would surprise many and earn the jealousy of even the most lavishly appointed aristocrat. Not surprisingly, there were shelves meticulously lined with books covering every human appraisal of that art known as war. However, the shelves on either side of these contained a dazzling array of collections: there were books filled with inked creatures and richly colored hand-drawn masterpieces, books delving into dark practices, books brimming with dark souls, and monsters, and things with long teeth and hungry eyes…

Yes, War loved books. This particular day he was sitting at the oak table, writing. His well muscled arm was covered in intricate designs, tattoos which told a never ending story, and it flexed as his hand flew across the thick paper. There was no hesitation as the ink appeared in smooth, uninterrupted lines. It was as though the tale he documented was memorized. This was how it was, and this was how he wrote it.

Pestilence leaned in the doorway of this room, studying the seated stance of War. His hair was long, almost as long as her own, and as he wrote, it fell in such a way as to obscure his face from her view. Pestilence was irritated, and watching him write with such a calm demeanor of peace further irritated her. Today had not been a particularly productive day, and Pestilence liked to see things happen. She liked to make things happen.

She was the shortest of stature of the Four, being mere inches shorter than them, though still tall enough by human female standards. She liked to wear green because it reminded her of the wilder places she’d visited, and because it was the colour of the skin once she released certain plagues in certain places…

Could it be said that one of the Four was bored..? Certainly, Pestilence was annoyed and wanted something to happen. She glanced around the large, rounded room which contained a thousand years or more worth of knowledge, and her lips tightened slightly as she realized she had never ventured far enough in to explore these treasures which were so lovingly stored on the thick smooth shelves of black oak.

Every now and again, a certain madness would overtake her and she would start a rift somewhere in the world, just because. So now, in the fading light, she felt the first twinges of this madness and an idea formed. How to do this? Physically impossible…? No – not necessarily, as she was just as physically fit as any of the Four. Now…? Should it happen now..?

So she watched, silently, knowing soon that War would conclude his thoughts on paper and end it for the day. She knew that destroying any of those marked papers would cause more than a rift, so she waited. Even as she contemplated this, she heard him sigh. He was finished. Ink was capped, quill was put away. Still, he did not see her.

He stood, lifting powerful arms upwards and stretching. Standing, he was a commanding sight: both arms and neck covered in inked art and always in the relaxed stance of one used to physical power coursing through unnatural veins. Pestilence raised one eyebrow, half-reconsidering her challenge, and then, as it was her nature, threw caution out the ivy covered window.

On silent feet she approached him, his back mostly to her, and with no warning, kicked him behind the knee.

A regular man would have gone to the ground, whether in pain, surprise, or both. War felt the air move behind him seconds before he felt the impact, and the result was that he only bent slightly, recovering quickly and spinning toward his attacker. His face barely registered surprise, blue eyes narrowed at this uninvited sparring. At first he did not speak, and simply moved into a fighting position.

Pestilence was not surprised her attack had not raised his hackles. This was War, after all, and all battles were waged in his name. She circled, contemplated her next move.

Rush him! And she did. Her green sleeves were tight and offered little in the way of traction, so his first attempt to grab her arms was unsuccessful. The premature bubbling of triumph tickled her throat, and she delivered a blow to his back with closed fist.

Still, no words exchanged, and barely any scuffling sounds registered within the spacious confines of the room. War felt the blow to his back and decided this was quite enough. An unprovoked attack, even from Pestilence, was too much a surprise and, as his day had been spent doing few war-related studies, he was not in the mood for a sparring now.

As she turned to deliver another blow, War moved with the speed of one conditioned to centuries of fighting. His hand shot out and he tapped her, once, open-palmed. The back of his hand made contact with her neck, and immediately a faint red welt appeared.

Pestilence stumbled, and as she regained her balance, arms flailing, War took the opportunity and, with practiced ease, stepped behind her and pinned her arms behind her. This dance had been circular, leading them around the room and over to the far end, and Pestilence found herself pressed up against the one wall of the room not housing books. The wall was warm and she had gone from irritated, to triumphant, to a kind of black rage. Good. GOOD. She struggled only a little, shifting her body slightly so that only one shoulder, one side of her, remained pressed to the wall. War allowed this, and finally, he spoke.

“Pestilence…this is not the sort of greeting I expect. What brings you to me this evening?” His voice was calm, a soothing rumble which belied his status. He did not know if she would answer. Her breathing was shallow now, giving away the emotions she refused to show.

“It was a slow day, War…” She said it through gritted teeth as her head leaned forward, as though she were looking down at her shoes. She mumbled something, and War, standing behind her and still holding her arms firmly to her back, leaned closer. His head dropped forward to hear her words. She spoke clearly now, suddenly, the mumbling a total ruse.

“Nothing to unleash today, War, and you know how I am…such a caring creature. Always needing to ….share!” She spit the last word out in a growl, bringing her head up with such speed it seemed she blurred for a moment. The back of her head made a sudden, cracking contact with his jawline, and she felt his hold on her arms loosen. She moved quickly, elated, spinning to face him and ready to do a bit more damage.

The chance never came. While the blow to his face stung, it did not affect War as it would an ordinary man. It only served to irritate him. As Pestilence whirled around to face him, his hand again shot out and this time, he was done. His hand was around her neck and she was shoved up against the wall for a second time. He moved closer to Pestilence, his eyes mere inches from hers, and he spoke.

“Your desire to share is noted, Pestilence,” he growled at her, his blue eyes never leaving hers. Her own eyes, a similar blue with flecks of grey throughout, widened as she realized her next move to bring up a knee and disable him in an unfair blow, would not be successful. He was turned in such a way to anticipate such a blow, and his grip on her neck could have easily tightened at any moment. At present, it was already a very firm grasp.

“One thing you must remember. There will never be a winner between us. War does not determine a winner. War determines who is left standing at the end of it all.” As he spoke, he felt Pestilence relax a bit and her eyes cleared a little. Whatever madness had taken her was dissipating, and his words were getting through.

Pestilence blinked, rapidly, her mind clearing. She stared at War, and suddenly grinned. He released his hold and she stumbled forward, embracing him. Her malice was gone, and he returned her hug, briefly, before stepping back and looking down at her.

“I would have not been standing…” she said, and allowed a chuckle to escape as they both turned to look out the window, seeing night had taken hold of the world and the creatures of the Darkness were already out, prowling.

In the doorway of the lavish turret study, Death stood, leaning against one side of the door frame. Famine stood alongside her, leaning against the other side. They had been watching the exchange from the beginning, unnoticed, and Death was smiling. She crossed her arms in front of her, feeling just a little smug, her sumptuous red gown shifting slightly as she turned and glanced at Famine. He had watched the exchange with one eyebrow raised slightly, and now he felt the gaze of Death. Seeing her expression, he sighed.

“It most certainly was not,” she said, and held out her hand.

Famine shook his head, smiling.  He reached into his breast pocket, pulling the strand of glittering emeralds out where they glittered in a kind of magical manner, and dropped the breathtaking prize into the hand of Death.